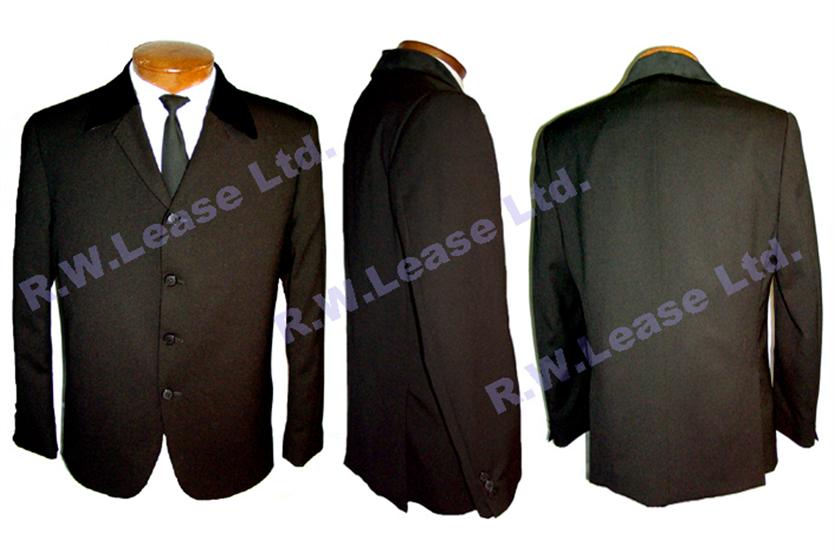 R.W. Lease, Ltd. is proud to present the Sullivan suit.

This is a perfect reproduction of the black suits worn by the Beatles for their historic Ed Sullivan debut on February 9, 1964.

The Beatles stage suits during their touring years varied widely in both style and fashion. Early on they were especially fond of the traditional English chesterfield models (the chesterfield is distinguished by having a velvet upper collar), owning at least fifteen different variations.

However, there was one particularly different chesterfield model designed for them in early 1964 and it was decided that this “special” model would be held until their trip to America in February. The “winged” collar chesterfield made it’s debut right along with the band on the Ed Sullivan Show on February 9, 1964. The suit is seen again later that summer when the band returned to New York and played the Forest Hills Tennis Stadium in August

R.W. Lease, Ltd. continues it’s tradition of working directly from the originals as it recreates this famous and historic suit. The velvet wing collar jacket is made of top grade year-round weight 100% worsted wool and fully lined with double inside breast pockets. The four-button front has no outside pockets and a double vent back with traditional three-button sleeves, all identical to the original suit.

The matching “drainpipe” trousers come open bottom with side-tab adjustments on  the waistband, again exactly as the original suit did. Suit jacket sizes run from a men’s size 36 to 50 and all sizes are offered in both regulars and longs. Slack sizes run from 30 waist to 44 waist.

​For the very first time ever, reproduced exactly stitch-for-stitch from The Beatles original suits.

Plus Shipping on all orders