After the Beatles two-week American visit was over, the skin went back to Abbey Road Studios where it was last seen in early 1964 before disappearing entirely, not to be publicly seen again until the 1984 auction.

The current overall condition of the Remo Weather King head is very good. It is a 20” coated  Mylar Ambassador with very slight cracking in the joint where the Mylar is fused to the aluminum ring, but nothing too serious. You can still see the faint pencil marks where a straight edge was used for letter alignment. None of the original pencil markings were ever erased off. The front of the head definitely shows some use. More so even than one would expect considering its short public tenure of two weeks. It exhibits the usual scuffs and scraps of being packed and unpacked and we know that most of these imperfections occurred during the actual first American visit because many of them show up in photos from the time. Most interesting would be a half-circle scrap starting at the top of the “B” and traversing through the “e” and into the “a”. If you complete this arch in full, you get a near perfect 14” circle. It appears that at some point when Mal Evans (Beatle equipment manager) was breaking the kit down, Ringo’s 14” hi-hat cymbal was laid on top of the flat lying bass drum, causing the scrape. This had to happen during the first Sullivan performance because the scrap shows up in the Washington Coliseum show photo I mentioned earlier.

When I took possession of the head in 1994, just the head itself was displayed in a sealed acrylic depth frame for hanging on a wall. It looked ok, but lacked the familiarity in your mind that you associate with the head on the Sullivan show. I thought it should be mounted on the front half of a Ludwig Oyster Black bass drum that would look as close as possible to the original drum that held it thirty years earlier. I called the Ludwig Drum Company to see if they could build me such a drum. After speaking to Jim Catalano about the project, I was referred to renowned vintage drum restorer, Jack Lawton, of the Lawton Drum Company in Sunbury, Pa. Lawton is quite familiar with the Oyster Black Pearl used by Ludwig back in the ‘60s. In fact, Lawton had reintroduced that finish (now called Black Oyster) in 1992. The material stopped being made in the 1960’s, so Lawton placed a call to the plastic’s original manufacturer in Italy and asked the company to reproduce the pearl, graying shade, and texture. They did and proceeded to sell him 400 pounds of the stuff for his own use. Ever since, companies like Ludwig have recognized Lawton as one of the nation’s finer restorers of classic drums.

The drum Jack used was an old 14x20 Champagne Sparkle shell manufactured by Ludwig in the mid-60s. The original finish was stripped off and the shell was then cut in half. The inside was sanded and painted white, and the outside was recovered in 60’s style Black Oyster Pearl. The original hardware was then cleaned up and reinstalled on the shell. A new black inlaid bass drum hoop now holds the vintage drum head in place. Jack was unaware of the price paid for the head when it came time to mount the skin on the shell. After a bit of a struggle, the tight fitting head finally went on. When Lawton was later told of its value (many times that now), he nearly went into cardiac arrest.

The Beatles’ Sullivan drum head is an icon of our generation. It is the only Beatle logo drum head to appear on any of their album covers (it can be seen on four) and, because of the Sullivan show notoriety, it is generally regarded as the most famous of the seven. It has been exhibited in Washington museums and on occasion at Jack Lawton’s annual Pennsylvania Drum Show. It recently completed a 1½-year stint at the Rock and Roll Hall of Fame in Cleveland and will no doubt be back at some point in the future. 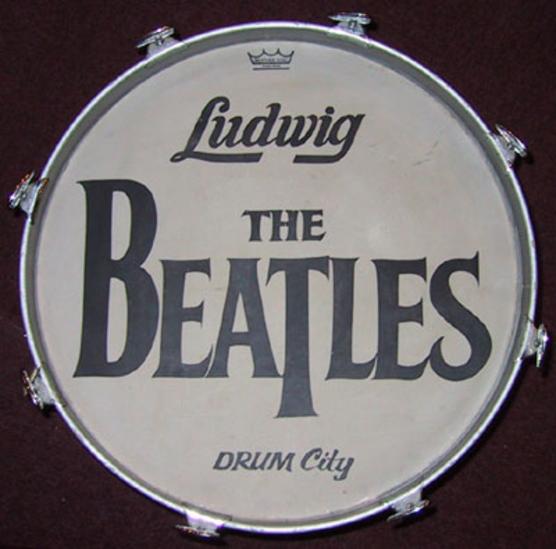 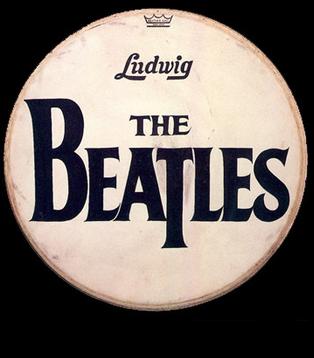 The February '64 Ed Sullivan drumhead as it appears today 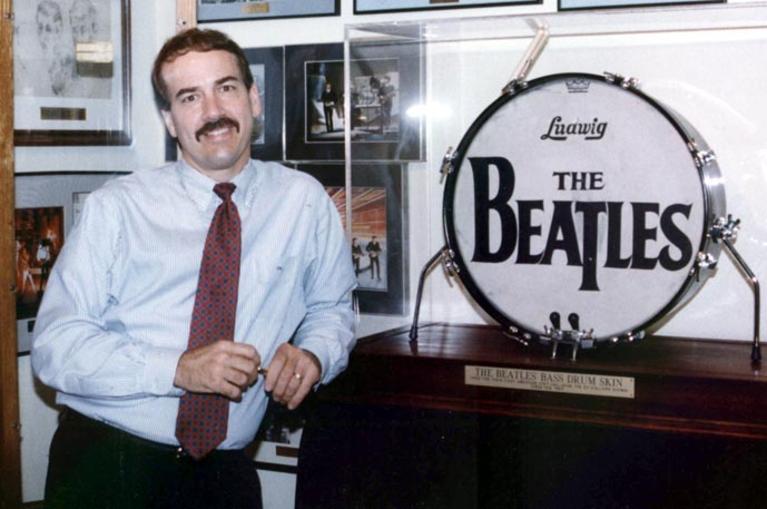 The Ed Sullivan drum head is head #2 in the series of seven drop-T heads. It was hand painted by Eddie Stokes in London in early February, 1964, specifically for the Beatles first American visit. Stokes worked for Ivor Arbitor at Drum City and was employed part-time to hand paint band logos for the drum retailer. It was also Stokes who had painted the first Beatles drop-T head.

In addition to creating the logo heads for the Beatles themselves during the 60’s, Eddie Stokes was asked to paint a handful (estimated at 6 to 8) of Beatle heads for use as display or for promotional purposes. Some were used in the Sound City or Drum City stores (both owned by Arbiter). Some were used for cinema promotion and at least one was done for Madame Tussaud’s in London. In virtually every known case though, some extra promotional graphic was also painted on the head in addition to the Beatle logo. 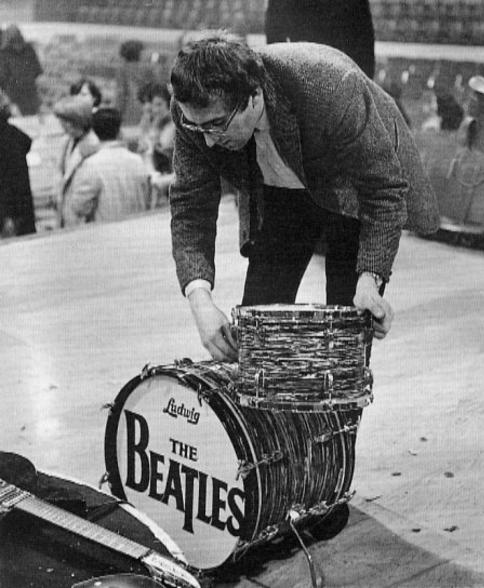